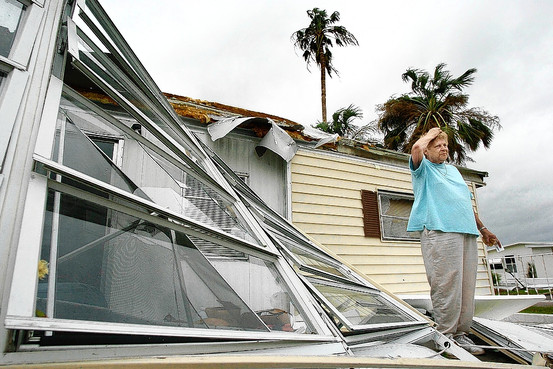 (Associated Press Photo)  CLOUDS GATHERING: Mary Musser looks over damage outside her mobile home in Brevard County, Fla, after Hurricane Jeanne in 2004. Some observers worry that insurers could be strained if the state sees another busy storm season this year.

Florida home construction won’t be the only thing tested if a big hurricane strikes the state this year. Florida’s homeowners-insurance market will be tested, too.

Florida has been a laboratory of experiments in recent years in ways to keep insurance affordable even as private-sector insurers have continued to reduce the number of homeowners’ policies they sell there. As the most threatening part of the hurricane season nears, the results of Florida’s trials could soon be in-and criticism is mounting.

In April, Florida TaxWatch, an independent, nonpartisan research institute, dubbed the state’s insurance system a “high stakes gamble” that “may be one major hurricane hit away from depending upon Federal relief or facing financial crisis.” In May, the U.S. Government Accountability Office echoed concerns about homeowners’ premiums not being high enough at the state’s giant insurer of last resort to cover the risks to coastal property.

The TaxWatch report concluded that Florida’s focus on rate affordability has meant that the state hasn’t collected enough money from consumers to responsibly fund claims from a major hurricane. The report also maintains that “compressed insurance rates may deter mitigation,” that is, low rates for coverage can leave homeowners unmotivated to invest heavily to hurricane-proof their homes.

State Deputy Insurance Commissioner Belinda Miller said the state has had some success in a difficult landscape, including helping to launch numerous private-sector insurers, known as “takeouts,” that are expanding nicely.

Those firms are expected to have “reinsurance” contracts in place to tap into global capital markets to help pay hurricane claims, she says.

Rate increases are being granted, she said, but cautioned that “everything cannot be solved” by higher premiums.

“Florida has had many task forces and public meetings to come up with better systems,” Ms. Miller said. “Undoubtedly, these issues will remain on the legislative agenda for the foreseeable future.”

While all hurricane-prone states have struggled to balance affordability of insurance with the risk-return calculations of private-sector insurers and those companies’ financial health, Florida’s long and vulnerable coastline has made the issue especially pressing for taxpayers and policy makers.

Between 2004 and 2007, Florida’s insured coastal exposure increased 27%, to $2.459 trillion, according to industry trade group Insurance Information Institute, as real-estate development stayed brisk even after punishing hurricanes in 2004 and 2005. National carriers warned that the rates they were allowed to charge didn’t reflect the dangers; as new buildings sprouted, they rapidly shed customers and continue to do so.

According to the insurance institute, the average homeowners’ insurance premium in Florida was $1,641 as of Dec. 31, down $274, or 14%, since mid 2007. In 2007, Florida lawmakers froze premiums at the state-created insurer of last resort, Citizens Property Insurance Corp., at 2006 levels.

Rate increases capped at 10% annually at Citizens are just this year starting to roll through. Numerous private-sector insurers have recently won approval to raise rates by double-digit amounts.

Ms. Miller says regulators also are pushing for legislative changes to help insurers hold down costs, so more of the premium they collect is available to pay hurricane claims. But she acknowledges that getting new hurricane-insurance laws on the books isn’t easy.

Florida’s statehouse this year passed legislation, backed by insurance regulators, designed to help insurers’ economics. It sought to curb potential fraud both in claims and in a program that provides discounts for certain hurricane-proofing measures. It also would have simplified insurers’ filing requirements for certain types of rate-increase requests, and would have tripled insurers’ minimum capital requirements.

Gov. Charlie Christ vetoed the measure last month, saying, “During these very difficult economic times, Florida consumers should not have to be concerned with an additional premium increase.” The governor recently left the Republican Party and is running for election to the U.S. Senate as an unaffiliated candidate. A spokesman said he has been focused on the Gulf oil spill and wasn’t available to comment.

As private-sector insurers scaled back, Citizens has grown to become the state’s biggest insurer of houses and condos, with 1.1 million policyholders. Most hurricane-prone states have these state-run programs to ensure property owners can get coverage.

To unload some of its risk, the state for years has run a program to nurture start-up insurance firms, known as takeouts because they “take” policies from the state-run pool.

Some investors, including private-equity firms, have found the program attractive because they can get an immediate book of business with no marketing expense. The state at times has provided low-cost loans to the fledgling firms.

Several dozen takeout firms have been set up since the 1990s, acquiring hundreds of thousands of policies. Some early ones weathered the 2004 and 2005 storms and have become larger, more diversified outfits. But “the financial strength of the new entrants is questionable,” said Melissa Gannon, an analyst at independent firm Weiss Ratings. Weiss gives two of the takeouts a grade of E+, or very weak.

If takeouts can’t pay up, other insurers could be assessed for shortfalls, a cost that they pass on to their policyholders. If Citizens itself runs short of funds, it would first surcharge its own policyholders, then it would turn to assessments on other insurers’ policies.

In general, the state views its takeout program as successful because “it took a lot of policies out of Citizens, and a lot of private money has been spent to pay for claims in Florida,” Ms. Miller said.

Still, three takeout firms have gone into receivership since last year. Florida officials say those collapses don’t necessarily foreshadow problems in case of a hurricane, because regulators expect takeout firms to acquire substantial amounts of reinsurance to cover hurricane claims; under reinsurance, a specialty insurer takes on some responsibility for paying claims.

Write to Leslie Scism at leslie.scism@wsj.com