Mike Colodny and the Meyerhoff Center Board of Directors Invite You to Honor 1972 Undefeated Miami Dolphins Team Member Manny Fernandez on December 2, 2010 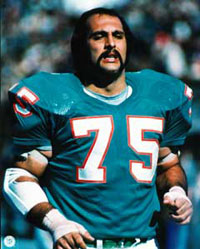 Above:  Legendary 1972 Miami Dolphins Team Member Manny Fernandez to be Honored on December 2

Manny Fernandez, a legendary member of the undefeated 1972 Miami Dolphins, will be honored for his 40 years of dedication to South Florida in a December 2, 2010 tribute benefitting the Joseph Meyerhoff Senior Center.  Veteran sports radio broadcaster and former Miami Dolphins receiver Jimmy Cefalo will serve as Master of Ceremonies.

The dinner event, which will be held at the Signature Grand in Davie, will celebrate Fernandez’ football accomplishments, as well as his career-spanning dedication to South Florida charitable causes.  Fernandez will be bestowed with the Meyerhoff Community Award as part of the December 2 program.

Of Fernandez, Hall of Fame Miami Dolphins Linebacker Nick Buoniconti said, “Super Bowl VII was the game of his life–in fact, it was the most dominant game by a defensive lineman in the history of the game.”  Among other individual accords, Fernandez was voted by Pro Football Weekly and USA Today as a member of each publication’s “All-Time Super Bowl Team” and was named “Outstanding Defensive Lineman” by the Miami Dolphins from 1968 to 1973.  He played in three Super Bowls for the team, two of which were victorious (Super Bowl VII and VIII).

“Manny’s ferocious determination—both as a football player and as a friend of the community—exemplifies the perennial South Florida spirit,” said Meyerhoff Chairman Mike Colodny.   “The kind of excitement he generates in all his efforts is what makes South Florida such a great place to live.”

All proceeds from the December 2  dinner event directly benefit the Hollywood-based Meyerhoff Center, which has been serving older South Florida adults and their families by providing a variety of programs and services since 1978.  Tickets, which include open bar cocktails and a silent auction, are $125.

For more information about the December 2, 2010 event, sponsorship and the Meyerhoff Center, contact Kimberly Danvers (kdanvers@meyerhoffcenter.org) or call (954) 966-9805 Ext. 117.