DES PLAINES, Ill., Jan. 30, 2018 — The National Insurance Crime Bureau (NICB) reports today that insured tailgate thefts have stabilized since 2014. NICB analysis shows that in 2016, there were 1,877 claims for tailgate theft identified in ISO ClaimSearch®, an insurance industry claims database. That number decreased to 1,788 in 2017. There were 17 fewer thefts noted in this report when compared to the 2014–2015 theft figures.

This table shows the annual tailgate theft claim numbers from 2014: 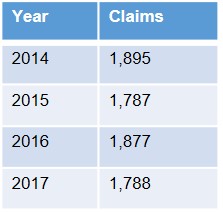 This report is based on insurance claims. Therefore, the actual number of tailgate theft incidents reported to law enforcement agencies may be considerably higher since many thefts do not generate an insurance claim.
The top five states for tailgate thefts—2016 and 2017 combined—were: Texas (1,360); California (1,039); Florida (240); Arizona (156); and Nevada (107). The top five cities for tailgate thefts during these years were: Houston (277); Dallas (242); San Antonio (196); Los Angeles (97); and Fresno, Calif. (79).
See the complete report.
The incentive for tailgate thefts is consistent with other thefts; the cost to replace an item legitimately far outweighs the risk to acquiring one by stealing it. With new tailgates retailing around $1,300, with even higher costs for some variants, the demand contributes to a thriving underground market for vehicle parts—a market fed with parts removed from stolen vehicles.
New vehicles now have locking tailgates that help deter thefts, and owners of older models can purchase tailgate locks to make their vehicles less attractive to thieves. A minimal investment in security can go a long way in saving owners lots of money and inconvenience should they become victims of tailgate theft.
More Resources
NICB ForeCAST Report: Pick-Up Truck and SUV Tailgate Theft Claims (2016–2017)