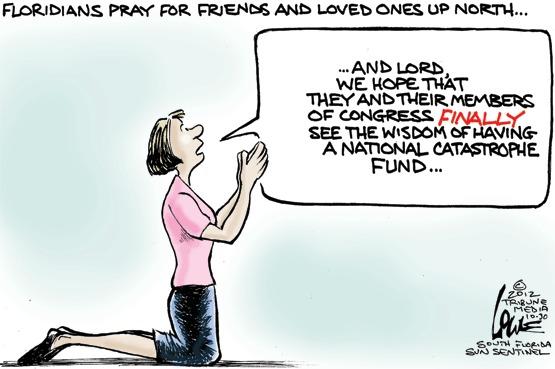 There are no Florida insurance-related events scheduled for today.

The owner of The Ocean View Delight restaurant on Fort Lauderdale Beach found some humor when the ocean view suddenly came up to his business’ front door.

Genie Cohen sat by the pool at the Waldorf Astoria Naples on Monday afternoon, but she would have rather been at home in Philadelphia.

Thanks to a little-known hurricane deductible, homeowners with property damage from Hurricane Sandy could be on the hook for thousands of dollars before their insurance payments kick in.

There is a lack of oversight and accountability at Citizens Property Insurance Corp.

The awesome power of Sandy barreling into the Northeast reminds us in Florida that hurricanes happen.

Disgraced former County Commissioner Kevin White is moving closer to becoming a millionaire, even though he is serving time in a federal prison for accepting a bribe.

Second printing error could jeopardize another 500 Palm Beach ballots, as copying of 27,000 continues

Chalk up another printing error for the beleaguered Palm Beach County elections office.

For the Obama campaign, victory in Florida hinges partly on a massive turnout from African-American voters.

The Florida Department of Health has temporarily suspended compounding operations at a pharmacy, the latest in a growing number of closings since a deadly meningitis outbreak caused by contaminated drugs in a Massachusetts facility.

A state regulator is getting an update on Progress Energy Florida’s crippled nuclear power plant at Crystal River.

State regulators denied a second summer jai alai permit to Flagler Dog Track and Magic City Casino this summer, but now the fight over the little-used loophole that would allow jai alai performances from May through November is spilling over into a separate battle to possibly open the door to more slot machines in Miami-Dade County.

Smuggling of Brazilians, other migrants growing in South Florida

A Brazilian couple was arraigned in federal court in Miami recently, charged with attempting to smuggle undocumented immigrants aboard boats from the Bahamas.

The best illustration of Rick Scott’s trajectory as governor of Florida is captured in the way he unveiled his first two budget proposals.

Hundreds of big stores shut tight from the Carolinas to Maine.

Significant rate increases for state-sponsored wind and hail property insurance policies that Citizens Property Insurance Corp. approved earlier this year were legal, according to an opinion by the state’s attorney general.

The Federal Emergency Management Agency is considering what might happen if widespread power outages and damage to polling places from Hurricane Sandy can’t be addressed in time for the election.

To unsubscribe from this newsletter, please send an email to Brooke Ellis at bellis@cftlaw.com.